Ruth was longtime member of the former St. Stephen Martyr Church in Milwaukee.  Ruth with her husband Vince founded the Polyak Trucking Company.

Memorials appreciated to the Maryknoll Fathers.

Please remember the Polyak Family in your thoughts and prayers.

Visitation Monday May 9th at ST. JAMES CATHOLIC CHURCH, W220 N6588 Town Line Road, Menomonee Falls from 11:00 am to 12:00 noon. A Mass of Christian Burial will be celebrated at 12:00 noon. Private interment with military honors to follow at St. James Cemetery.

Of Sussex, Wisconsin. Elizabeth died peacefully on April 9, 2022 at Brookdale Senior Living Center. She was born on August 9, 1925 at home on the family farm in Willow Springs. She was the daughter of the late Gustav and Laura Semrow

She is survived by her loving daughter, Beth Ann (Jozwiak) and son-in-law Jeffrey Jozwiak. She is further survived by very special nephews Paul J. Tutzke and Michael J. Hart along with many nieces and nephews and extended family who held a very special place in her heart.

He is survived by his wife Kitty for 67 years. His four children Scott (Tracy) Nedved, Kris (Richard) Musselman, Kathy (Henry) Hoffman and Ed Jr. (Rose) Nedved. He is also survived by six grandchildren and 12 great grandchildren. Sisters Sally (Bill) Bouer and Blanch Habermeier of Minnesota. He was preceded in death by his parents, three brothers, one sister and I grandson Cory.

Ed proudly served his country in the United States Marines from 1953 to 1956.

Funeral services Friday April 1st at the Schmidt & Bartelt Funeral Home Sussex W250 N6505 Hwy 164. Visitation from 10:00am until the time of service at 12:00. Burial service along with Military Honors at St. James Rose Hill Cemetery in Sussex to follow. Memorials appreciated to the Cancer Society.

The family wishes to extend a heartfelt thank you to the caregivers at Froedert Community Hospital Menomonee Falls and especially to Dr.Julie Heyerman for her kind and compassionate care.

Germantown- Katie passed away Monday, February 28th, 2022 due to complications of old age. She was two days shy of her 87th birthday.

Katie was born March 2nd, 1935, in Two Rivers, WI to Chester and Edna (nee Taddy) Thiede. She graduated from Washington High School, Two Rivers, in 1952. She married her first husband and father of her children, Rodney J. Kershek, in 1957. Rod and Katie settled in the Milwaukee area and soon began a family that included four daughters. Rod passed away in 1976, leaving Katie to raise their girls on her own. Katie was blessed to marry Kenneth E. Reich, a close friend of Rod’s, on February 14th, 1985. Katie and Ken spent their honeymoon traveling by car to California. They settled in Redondo Beach, CA where Ken finished out his career in finance and Katie devoted herself to being a full- time wife and homemaker. They remained in Redondo Beach, CA until 1995 when they came back to Germantown, WI to be close to family and friends.

Katie worked for over 20 years at the J.C. Penney Distribution Center in the Computer Operations department. She made many wonderful friends while working there. While in California, Katie became involved in the Neptunian Women’s Club of Manhattan Beach. The volunteer organization worked on many projects to improve the community. Katie served as President of the club from 1991-1993. She was very proud of her accomplishments as President. After moving back to Germantown, Katie continued her spirit of volunteer work with HOPE Network, an agency providing resources and support to single mothers throughout their parenting journey. Katie felt a deep connection to the group because of her own journey as a single parent.

Katie is survived by her cherished husband, Kenneth E. Reich, beloved daughters Wendy Kershek and Tracy Devine. Katie was the loving and supportive mother-in-law of Ric Miller and John Devine whom she was deeply grateful to for the care they showed to her and to her daughters. Katie’s greatest role in life was that of doting and devoted grandmother to Jacob, Calahan, and Brady Miller and Michael Devine. No one was more excited to be blessed with four grandsons than Katie. She loved each of the boys unconditionally and took great pride in all their accomplishments. We should all be so lucky as to have a Grandma Katie in our lives. Katie is also survived by her two younger brothers, John Thiede and Gerald Thiede.

Katie’s family would like to thank the staff at Fairway Knoll for the incredible care and compassion they bestowed on Katie during her final months. The family is also grateful to Horizon Hospice for their kindness and expertise during Katie’s final weeks.

Out of respect for Katie’s disdain of graveside services held during cold Wisconsin winters, the family will inter her cremains when the weather is warmer. A celebration of Katie’s life will be held at that time. In lieu of flowers, memorial donations to HOPE Network, P.O. Box 531, Menomonee Falls, WI 53051 would be appreciated. 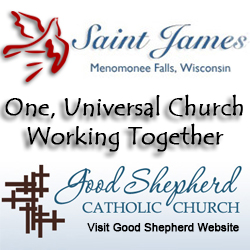 Serving the Suburbs West of Milwaukee

St. James is a Catholic church in the Archdiocese of Milwaukee, Wisconsin.

Scroll back to top